You picking this up?

Since 2013 The Command & Conquer Communications Center has lain dormant. No news, no updates, nothing, but broken pages in need of repair. Today, The Communications Center returns stronger than ever before! With a new look, new sections and the return of long lost features such as downloads and image galleries.

C&C Comm has been entirely rebuilt. This new version has been designed with the modern web in mind and adapts to the many different devices people use to browse it, like PC's, mobile phones and tablets. The layout and visual design has been created with usability in mind and hopefully is easy to navigate and understand.

The new website is not perfect though as this is the first version of a giant overhaul, bugs and other issues exist so therefore feedback on anything is greatly appreciated.

New content and sections are planned for the future.

There are 2 sections about the developers of the games: Westwood Studios, Intelligent Games

The Westwood section includes a general history of the company and a gallery featuring behind the scenes images. 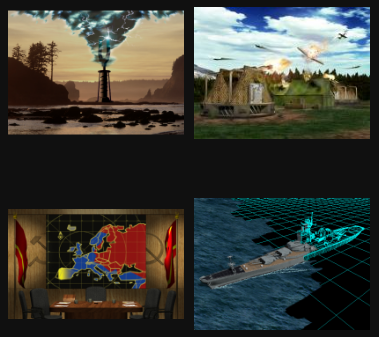 The new image galleries on the different sections might be the largest ever made for a C&C fansite. Combining the collection efforts of tomsons26, Nyerguds, CCHyper, Plokite_Wolf and myself we have created a giant image gallery. Some you images may have seen before, but others, thanks to the donations of certain ex-Westwoodians, have not been on the internet before or have been gone for decades.

There is also one gallery for Westwood Studios

The downloads sections have a variety of different downloads like mods, patches and in some cases the full versions of games both in installers created for modern systems and in their original form as CD images.

It has taken 1 year and 4 months to get here, and I hope it will be of some use for people otherwise it has been a fun learning experience.

A big thanks to everyone who gave feedback on the site during it's development!