Dune 2000 is a real time strategy game released in 1998 co-developed by Westwood Studios and Intelligent Games. Dune 2000 is a remake of Dune 2 with new graphics and a different engine created by Intelligent Games. The mechanics and interface has been changed and functions more like Command & Conquer than Dune 2. Dune 2000 roughly follows the story from Dune 2 which is now presented in full motion video inspired by the Dune movie by David Lynch. 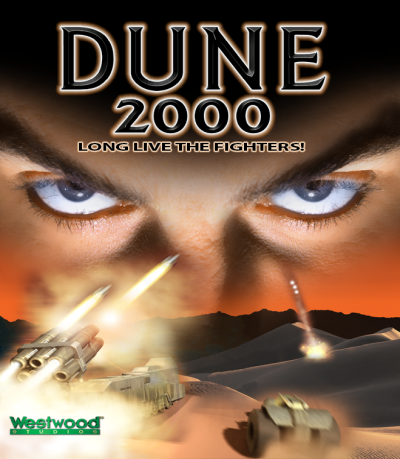 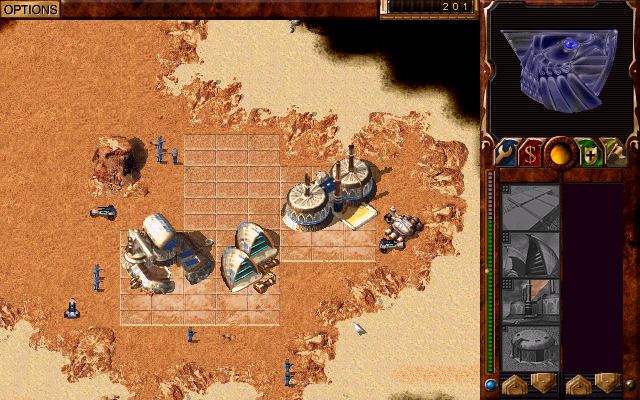 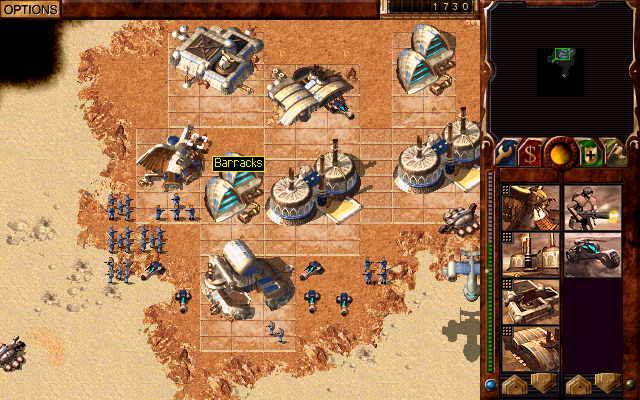 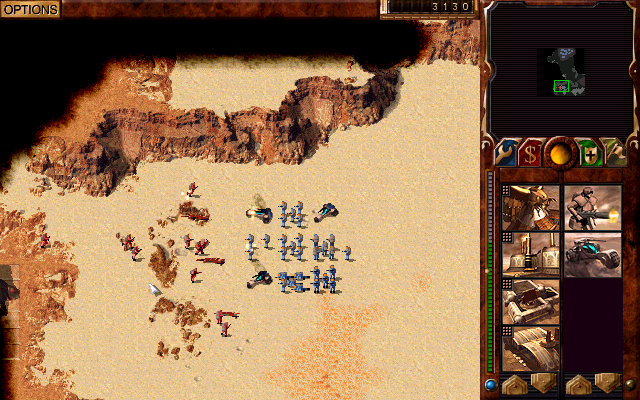 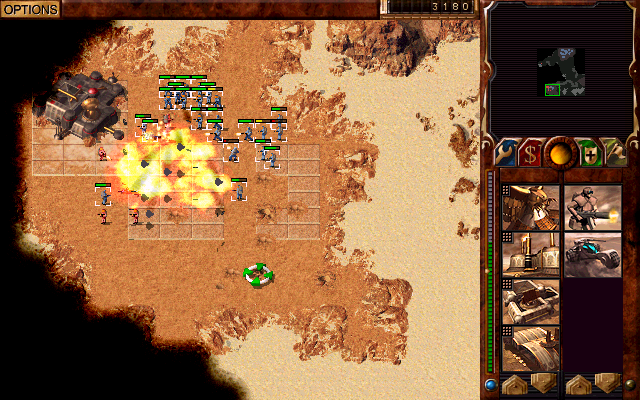 The planet Arrakis, known as Dune. A land of sand, home of the spice melange. The spice is the most valuable substance in the known universe. The spice extends life, the spice expands conciousness, the spice is vital for space travel. To accelerate the harvesting of spice the Padishah Emperor, ruler of the known universe proposed a challenge to the great houses: "The house that produces the most spice controls Dune. There are no set territories, no rules of engagement".

Vast armies have arrived. Now 3 great Houses fight for control of Dune. The noble Atreides, The insidious Ordos and The evil Harkonnen. Only one House will prevail... 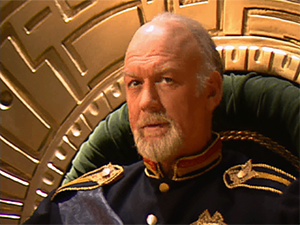 House Corrino, led by The Padishah Emperor Frederick IV, is the currently ruling House of the known universe. The Emperor rules the galaxy from the Golden Lion Throne on Kaitan. His rule strengthened by the command of his fanatical Sardaukar terror troops. The strength of one Sardaukar is equal to 10 conscripts of the other houses of the Landsraad.

However, the Emperors real might stems from his control of Arrakis - Dune. The only place in the known universe where the spice melange can be found. The Emperor knows that every house in the galaxy be they major or minor would like control of Dune for themselves. And so the Emperor trusts no one.

This means that the Emperor's challenge is mysterious. He would never give governorship of Arrakis to anyone and yet, now he has offered it as a prize. The Emperor's true intensions behind this challenge is unknown, but the other houses should watch their backs. 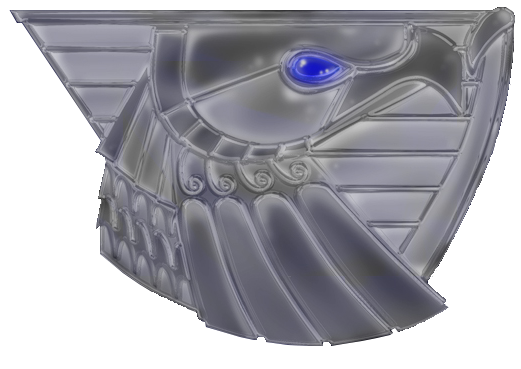 "For the Duke!" - Battlecry

"[...] Riches! Is that why you have come to this blasted sandpit? Crawling with Harkonnen who would rather drink your blood than their mothers milk. Filled with worms the size of a hundred men keeping you clinging to rocks like children. Let me remind you that we are here to fight for the Duke! [...]" - Mentat, Noree Moneo

Led by the noble, just and intelligent, just like the House, Duke Leto. The noble House Atreides come from the lush, blue planet of Caladan - The water world. A noble people who would rather solve conflicts through the use of diplomacy rather than violence.

Advisor and Master of Assasins on Arrakis is the equally noble and intelligent Mentat Noree Moneo.

The Atreides have access to the formidable Sonic Tank which uses soundwaves to destroy enemy targets. The Atreides also have an alliance with Dune's native population the Fremen which occasionally aids them in battle. They also have air dominance with their use of ornithopters. 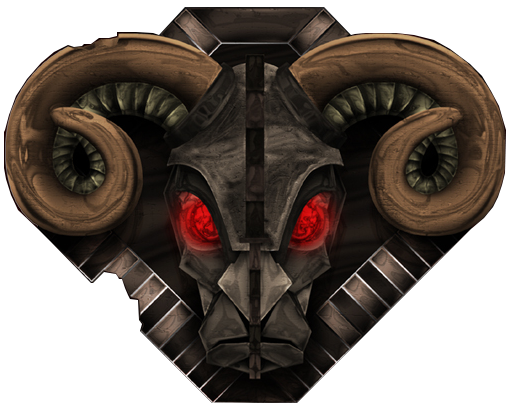 "For the Baron!" - Battlecry

Led by the cruel and violent Baron Harkonnen. The evil House Harkonnen are from the dark and polluted planet of Giedi Prime. A ruthless and cruel people who see any noble acts as a sign of weakness. The Harkonnen enjoy a good battle therefore they are more likely to solve conflicts through the use of violence.

Advisor and Master of Assasins on Arrakis is the mentally unstable Mentat Hayt DeVries, a ruthless and brilliant ghola. Purchased from the flesh-vats of the Planet Tleilax. 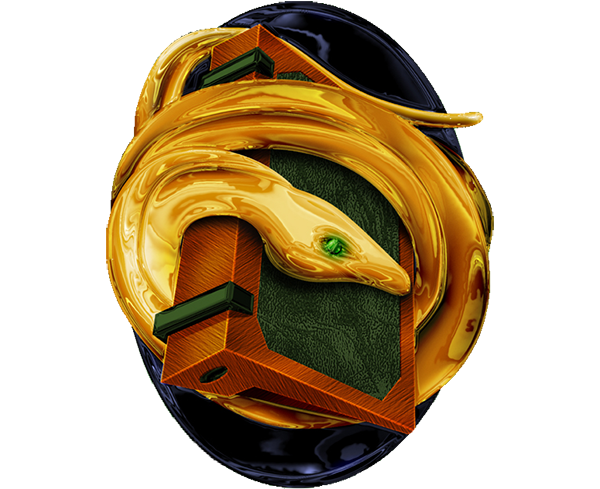 "In the Imperal Basin there is a small Harkonnen outpost. Destroy it. That is your mission. [...] Restore spice production or live out your life in a pain amplifier. That is a threat" - Edric O

The insidious House Ordos of on unknown, but rumoured cold ice planet in the galactic fringes, is a cold calculating house whose sole purpose is to accumulate more profits. They have no concept of loyalty and employ large numbers of mercenaries rather than to fight battles themselves.

The Ordos have access to the fast Raider trike, the sneaky Saboteur and the Ix produced Deviator missile tank which creates confusion in enemy ranks and may even temporarily cause enemies to switch sides. 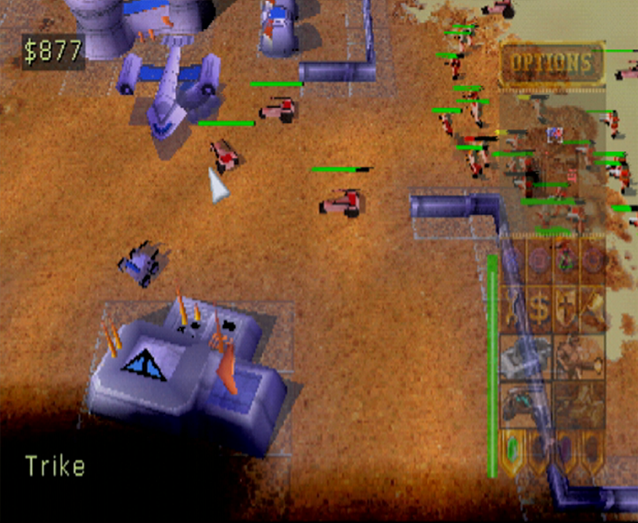 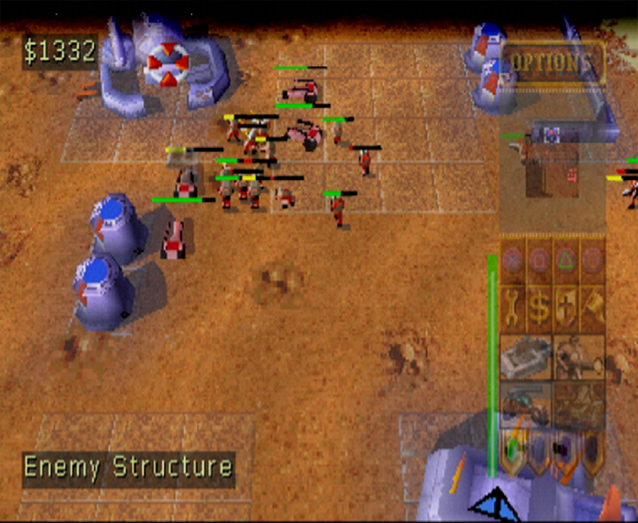 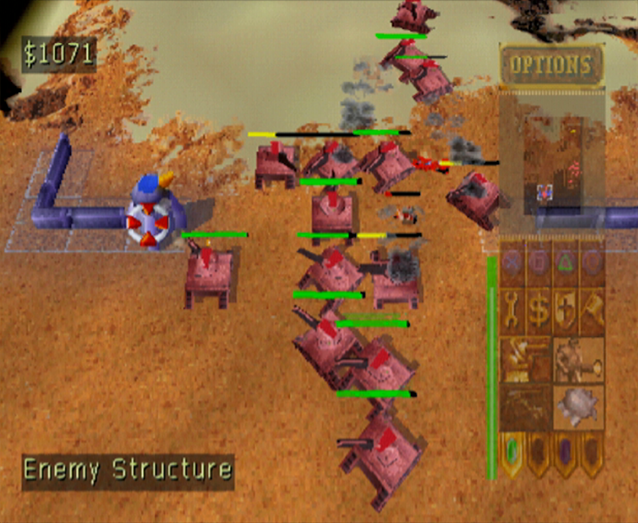 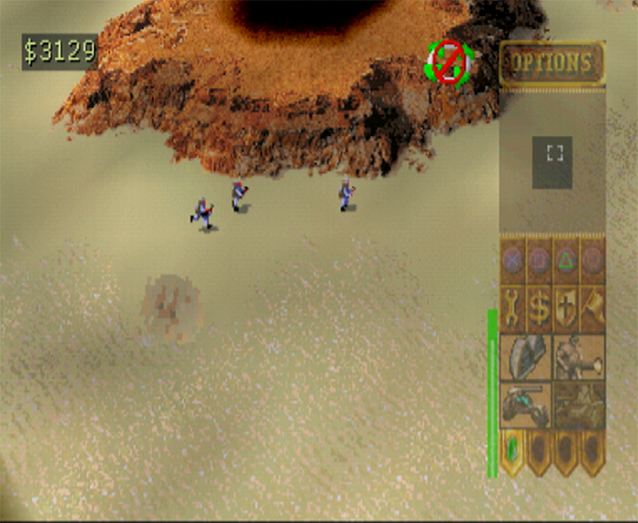 The PlayStation version, unlike the PC, version has built in cheats.

The PlayStation port supports the link cable allowing for multiplayer.

It also supports the PlayStation mouse.